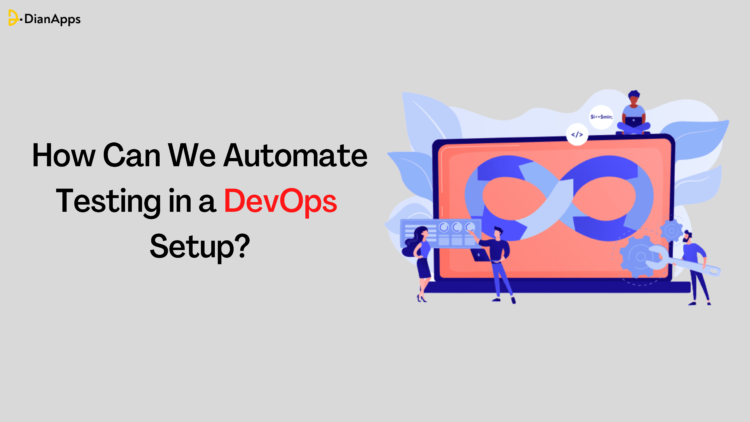 How Can We Automate Testing in a DevOps Setup?

Automated testing is now a key ingredient for a successful DevOps practice. However, implementing automated tests across a large number of your development pipeline is no simple task. There are many things to understand and many decisions to make in the web or app development process for faster and first-rate delivery.

You probably must be wondering what is the role of test automation in a DevOps setup. Well, the tool helps developers to capture continuous testing– an important part of delivering quality software at a comparatively higher speed while also intensifying productivity and lowering the risks and costs associated with bugs found in the early stage of software app development.

But why is test automation considered a critical part of the DevOps lifecycle? Let’s find out in the below segment!

What is test automation?

Test automation is a practice of validating and reviewing a software product automatically, for instance, a web app development, to ensure it joins predefined quality standards for code style, functionality (business logic), and user experience.

Why is test automation crucial in DevOps setup?

The necessity of test automation across the lifecycle is critical as organizations mature their DevOps practices in order to unlock the key benefits of DevOps as a service — the ability to build, test, and ship faster and more reliably, simplify adverse event responses, and enhance collaboration and interaction across teams.

It is no longer acceptable to allow a release build to remain with the QA team for several days before developers receive input and resolve reported bugs. QA teams must synchronize their efforts in the DevOps cycle by automating test cases and achieving nearly 100% code coverage.

Environments must be standardized, and deployment on QA machines must be automated. Pre-testing, cleaning, and post-testing operations, for example, should be automated and integrated into the continuous integration cycle.

Although testing is only one component of the release pipeline, it is an obvious choice for automation. Regression testing, in particular, which is very repetitive and time-consuming, might benefit from automation to free up tester resources so that they can focus on work that requires their human skills rather than robotic work.

How to get started with automation testing?

Now that we’ve covered the fundamentals of test automation and DevOps, it’s time to look at the implementation.

To include automated testing into your DevOps solution lifecycle, you must first plan your release pipeline. This may be accomplished in four steps:

The following step is to create your automation flows. The simplicity and speed with which you may do this, as well as the strategy you’ll need to take, are entirely dependent on the tool you use, which is why we’ll focus on it last in this blog article.

Here are a few best practices to consider while getting started with test automation:

A.  Develop an automation flows and gradually increase coverage over time:

Begin with flows that are simple to automate that are both predictable and repeatable. In most circumstances, the very basic and highly repeated processes will consume the vast majority of your testing time.

B.  Begin by testing one thing at a time:

It is easier to determine what goes wrong when a test case fails when the complexity of a single test flow is limited. This is not just good practice for novices, but also for a web development company. Instead of condensing several tests into a single test case, it is advisable to use your test automation platform to create reusable components. The logic included in existing test cases may thus be easily reused, and the time necessary to construct a new test case is reduced.

Flow structure can be reused between test cases, however, it’s best to keep tests independent. This allows them to be scheduled all at once and executed at any time and in parallel, i.e. across various settings.

Remember that automation success is contingent on a team’s combined expertise. Adopt a test automation platform that all testers can use so that automation becomes a natural part of all team members’ everyday work.

If you want to learn more about test automation before you start strategizing and implementing, we recommend taking DevOps consulting service from a mobile app development company, as they may walk you through everything from understanding test automation opportunities and how to approach them to implement test automation and maintaining and analyzing your tests.

How to find the correct test automation tool for DevOps

The final step in test automation in the DevOps setup is to look for the right development tool.

Although, the options in test automation tools are diverse. Picking the one that must correspond to your DevOps lifecycle while also giving your team quality deliverables at speed, which is apparently the #1 objective for DevOps developers.

Open-source alternatives such as Selenium are popular. However, before you put your time and effort in these technologies, it’s a good idea to understand how they function.

To assist you, we’ve compiled a list of characteristics and capabilities that are excellent to have in a test automation DevOps service and solution. If you’re thinking about using Selenium, be sure to consult your web app development service providers.

A DevOps test automation tool should:

Embracing test automation to realize DevOps’ full potential will minimize blockages and boost productivity, both of which will have a direct influence on employee and customer pleasure, and ultimately the bottom line. Begin your testing automation by hiring a DevOps developer for your next business project.

Another best way would be to consult a website development company that specializes in developing solutions that remove crash instances while helping you build a software product relatively faster.

How to Achieve a Civil Engineering Degree

How to Have the Best Relationship Ever

How to Play My Spotify Playlist on Peloton?

How to Setup While Selling Products Online?

How to Interact With the Elrond Blockchain in a Simple Static